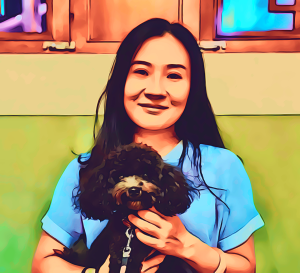 Dear female tourism researchers of the future (among whom I am),

HUG and WELCOME at first since reading this letter means you have set foot in the amazing field of tourism research. You must have learned a lot of valuable advice as I do from letters written by our honoured foremothers. Struggling at early stage of my academic career, I could yet reach systematic conclusions about how to live a smart career life. Instead, I would like to share my understanding of a focused topic-work-nonwork boundary management. My purpose is to remind us of the importance of caring our delicate boundaries and establishing sustainable boundary management strategies.

I will try not to make this letter serious, but I may slip to theories, data, and methods naturally. It’s because it’s me, who study leisure and playfulness but don’t look leisure or playful though actually I am! I don’t have such identity threat, in terms of my another research focus- Digital-Free Tourism, enjoying presence and spending reasonable amount of screen time daily.

The following may help if you have the same feelings as I do: I love this job (not necessarily institution-specific, but doing what I am doing- researching, teaching, and servicing in tourism). The job is part of my identity and who I am. And I think there’s societal aspect of being female in academic that I haven’t even fully unpacked to understand how it impacts me on a day-to-day basis.

Undoubtedly, academic work is demanding, academic women are highly career invested. We really need and appreciate the recognised welfares of being an academic, namely flexibility, work autonomy, and unceasing development. However, these deprive us of excuse for exiting nonwork roles sometime as we should. The tension between work and nonwork roles might have exerted more influences on our career and overall well-being in the post-COVID 19 era than previous pandemic. By the way, I seized doctoral degree and started academic career two months after the pandemic happened.

Here are some tips concluded from a study conducted specifically for this letter. Fourteen female tourism researchers at various career stages who work at universities were interviewed and observed. Hope their practices and perspectives facilitate your adaption.

Hopefully, these tips derived from the 14 interviewed confederates could add to your wisdom of balancing dual role responsibilities. Way to go, girls!