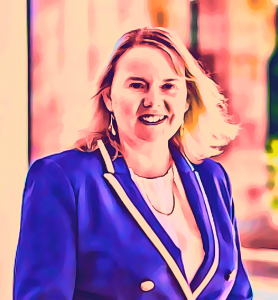 I was born in small village in the Scottish Highlands, and I spent all of my childhood in that area. A trip to the shops in the nearest major town was quite an adventure in those days! When I left home to go to university (Heriot-Watt in Edinburgh), it was the first time I had lived in a city and it was very exciting for me. I studied languages (French and German interpreting and translating) and I always wanted to work for the European Union as a simultaneous interpreter. However, after doing a placement in Brussels at the EU, I saw how competitive and stressful it was, and I decided that it wasn’t for me. My first full-time job after I completed my bachelor’s degree was in the Edinburgh Tourist Information Centre, which I got because of my foreign language skills, and that’s where my love affair with tourism started.

I went on to complete a Master’s degree in Tourism at the Scottish Hotel School in Glasgow (part of the University of Strathclyde) and enjoyed it very much, and decided to work in the tourism industry thereafter. I worked in tourism for ten years, with positions including Public Relations Executive for a group of visitor centres, Business Development Manager for a small Scottish tour operator, and Product Development Manager for a hotel consortium. This experience gave me great insights into the challenges faced by the tourism industry. After my children were born, I decided to take some time out of the industry, but discovered very quickly that I wasn’t cut out to be a stay-at-home mum… so I went back to the Scottish Hotel School and completed my PhD part-time. I graduated in 2005, and got a part-time job working as a consultant in a tourism management consultancy.

About this time, my then-husband realised that his job was under threat of redundancy due to changes in the global market for semiconductor production and we decided it would be the right time to emigrate to Australia… we packed all our things into a container and we flew to Australia, with a mixture of excitement and apprehension. On arrival in Australia, I was able to make contact with previous Scottish Hotel School colleagues (known jokingly as the Strathclyde Mafia!) and secure work firstly as a research assistant, and then as a postdoc fellow at Victoria University in Melbourne. Although I completed my PhD later in life than many, I believe that my industry experience gained before I returned to study has helped me to more easily relate to industry issues and problems throughout my research career.

A position as a lecturer, then promotion to senior lecturer at Monash University followed, and then I moved to Brisbane to work with the University of Queensland, initially as senior lecturer, and now as Associate Professor and Discipline Leader of Tourism. It’s been a long journey from that small Highland village, but I love what I do, and wouldn’t be anywhere else.

My personality has been very helpful to me in my development as a researcher – I am quite determined and a bit of a perfectionist, and so this has helped me to produce some great work, even under the challenging circumstances of being a mum (and latterly a single mum), and trying to balance that with the responsibilities of my work. One thing that motherhood has taught me is how to be more efficient – I can now complete work much more quickly than before, perhaps because I am aware that the time I can devote to my work is somewhat limited and so I have no time to procrastinate or prevaricate! However, I also value my quality of empathy, and I think that this has helped me to become a better leader, both in terms of research teams but also in relation to my position as an academic manager and mentor.

If I were to have the opportunity to tell my younger self anything, it would be ‘don’t worry so much about what other people think’. People genuinely don’t judge you as much as you think they do, because most people are far too busy with their own lives. Although reputation is an important part of your academic persona, this is based on things like publications and grant success, not what age you are, what you look like or how long it has taken you to get where you are.