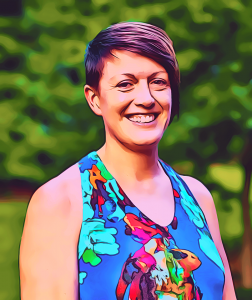 I would like to share a story from my field research for my dissertation with you. I believe this story has some valuable lessons that other women might appreciate. I have changed people’s names to protect their identities. I was living on the Pacific Coast of Nicaragua for several months studying localism (the territoriality of local surfers) in a small indigenous community that was gaining a reputation as a world-class surf tourism destination. One day, about three weeks into my field work, I carried my surfboard the 1 kilometer across the salt fields, across the questionable bridge over the river, through the mangroves, and to the beach as I had done many times before. A swell was supposed to arrive that day, and I had brought my camera to take pictures of the surfers. On my way, I encountered a local surfer who lived next door to my host family. We introduced ourselves to one another and chatted about how Nicaraguans measured waves. When we arrived at the break, I told him I was going to wait until the tide came in more before paddling out. He headed into the water. My small digital water camera did not have a very good zoom lens on it, and so I set my board down on the beach and walked into the water to try to get some better pictures. I picked my way around the rocky reef and finally found a stable perch from where I could take pictures. I took some pictures and then stepped off the rock to walk back on to the sand. As I stepped down, something pinched my foot. At first, I thought it must have been a crab. However, as I walked out of the water, I noticed that my foot was bleeding profusely, and the pain was getting worse and worse. Having been pinched my crabs many times before, I knew these were not common symptoms. “Sting ray” was the next creature that crossed my mind. My next thought was, “Aren’t these things poisonous? At least it wasn’t in my heart like Steve Irwin!”

There was not much infrastructure at the beach, but there was a small parking lot and a large rancho where people hung out to watch the waves. I limped up the stairs to the rancho and encountered some Americans who asked what had happened. One guessed urchin, another guessed sting ray, and I told them I thought it had been a sting ray. They told me to sit down, and I asked if anyone had a first aid kit and one man suggested hot water, another suggested vinegar, and an older man poured fresh water over it. One of the men, let’s call him Matt, told me to get in his vehicle and they would take me to the place where they were staying. They said one of the Nicaraguan employees (a local surfer who I also knew – Alejandro) might know what to do. After much ado, they finally got in and drove me to the lodge. Throughout this entire time, I was yelling and cursing because of the pain. Another man, Steve, was being a jerk much of the time, saying things like, “Oh you’ll be fine! Hurts like a bitch, doesn’t it?” As I was waiting for everyone to get in the vehicle, I saw him place a small voice recorder in the center console. “Are you kidding me?” I thought to myself. I am pretty sure he was trying to record my screams, but he later realized the device was not turned on, much to my relief. On our way to the lodge, I told them what I was doing there, which they thought was incredible, and I told them I would write about them in my dissertation (they did not make the final version). When we arrived at the lodge, they went in and retrieved Alejandro. He told me that usually people in the community put fire near the wound because they consider sting rays “frozen” animals (they do tend to show up when the water is cold) and the poison in their tails is like ice. Therefore, putting fire near it, or hot water on it, “melts” the ice (draws out the poison). I later confirmed this belief with other community members. So, he boiled some water and poured it on my foot. This process was not nearly as painful as the pain radiating from the wound. Then they put hydrogen peroxide and iodine on it, and then dressed it with gauze and medical tape. We all agreed that I should still go to the clinic and I told the guys I needed to go to my host family’s house first to get some money. They had to take one of the guys back to the beach, further prolonging my wait for medical treatment.

When we arrived at my host family’s house, I explained what happened and ran in to grab my wallet while the guys unloaded my board. My oldest host sister called my host mom to let her know I was coming; she was already at the clinic with my youngest host sister, who had been dealing with a stomach issue. Steve seemed to think we were just dropping me off at my house (he set down my board with a “I think you’ll live”), but Matt knew I needed a ride to the clinic. We headed to the clinic in a nearby community a few kilometers down the road. We even stopped and picked up a local restaurant owner who needed a ride (these guys obviously had never been stung by a sting ray, because they were not in a hurry). My host mom met me at the clinic, I thanked the guys and told them I would take the bus back with my family. The clinic staff took me back, cleaned the wound, and injected it with numbing medication to relieve the pain. They wrapped it up and gave me antibiotics to prevent it from getting infected. As I waited for the bus with my host family, I finally felt like I wanted to cry, but I held back my tears. The pain had been a major distraction and now that it was numb, the reality of my experience was hitting me. I had to stand on the crowded bus all the way back to the house. I took a bucket bath, while crying, and called my parents to let them know what happened. I was upset and incredibly anxious because I knew this would slow my research progress, as I would have to stay off my foot to let it heal, which meant I could not go interview people or conduct observations at the beach.

The day after it happened, Alejandro came by to check on me and he offered to do his interview at that time. I got my recorder out and we did the interview on my host family’s porch. I also continued working on interview transcriptions during this down time. After a few days of nursing my swollen foot, and I felt comfortable enough to ride my bike around the community to do interviews again. After about a week, the wound had healed, and I could walk back out to the surf break to surf and conduct observations. Despite this set-back, I still completed all my interviews and documented plenty of observations. This study set the stage for my future research on surf tourism destinations. My research has advanced our understanding of the phenomenon of surf localism in several Central American tourism destinations and the complexities of local, expatriate, and tourist relations in these places as well.

While there are many lessons you could take from my story, I’d like to highlight four:

After completing my Ph.D., I wanted to get a tattoo to symbolize my achievement. I knew exactly what I would get. I asked a marine biologist friend how I could find pictures of sting rays from a certain area of the world. He sent me to a database where I found a sting ray (or skate, most likely a skate was the animal that got me – however few people distinguish between the two in common language) that ranged from Nicaragua to Costa Rica. I took several pictures to a local tattoo artist and the sting ray now lives on my thigh, a reminder of overcoming a hurdle on my research journey. It was also much sexier than getting a tattoo of a giardia parasite (which got me several weeks later), but that’s a story for another time! 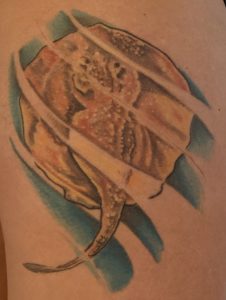