I was born and raised on an island that lives on tourism: the island of Madeira. The growth and development of tourism in the region has always been associated with the climate and the beauty of the cultural and natural landscape (Marujo, 2013).

One of the greatest cultural attractions of the island of Madeira lies amid the exuberant landscape: the levadas (irrigation channels that run across the island for more than 2150 km and which constitute one of the richest features of the historical identity of the region). The levadas are considered a living monument of Madeiran culture (Fernandes, 2012); they are one of the attributes for promoting the destination and therefore attract many tourists (Marujo, 2013).

My first contact with tourists, especially English ones, arose from the levadas that pass behind my parents’ house. I was 11 years old. I was learning English at school and already knew a few words. When my mother saw tourists dressed in white shorts, sandals and socks, wearing a backpack and with cameras around their necks, she immediately realized that these must be tourists walking through the Madeiran countryside along the levadas, and she would call me to come and talk to them: “Here come some English tourists. Come and see. Talk to them – you know their language”.

In the rural world of Madeira, in the 1960s, 70s and 80s, any tourist was always labelled as English by the community, particularly because of the way they dressed. But they were not always English. When I went to talk to them, I was often greeted with a ‘Guten Tag’ or a ‘Bonsoir’. In these cases, the communication barriers between us (hosts) and others (tourists) were, to a certain extent, overcome by means of sign language. When it came to English tourists, social interaction was easier. My mother was very curious to know tourists’ opinions about our island, if they were going to return and pass the word on to others. The art of welcoming (host hospitality) was also part of the dialogue, as she always wanted to offer them a glass of wine produced in the village. Thus hospitality turns strangers into acquaintances, and enemies into friends (Selwyn, 2000). The meetings were brief. But in some cases, the camera came off the tourist’s neck for a souvenir photo that later arrived at our house by mail.

Watching tourists and interacting with them has always fascinated me. But when I was younger, it never occurred to me that tourism could be studied on an academic level. My degree was in media studies. It was only when doing my master’s in sociology that I started doing research into tourism, but from the angle of the field of information and promotional technology. When I started teaching on the degree course in tourism at the University of Évora in 2004, I came to the conclusion that I needed to do a PhD in tourism. When talking to my parents, I mentioned that I had to do some research on tourism. The answer quickly came back and I was given an idea for my ​​studies: “Study the traditional festivals to see and talk to tourists”. I replied that I could also observe and talk to tourists in other situations than at festivals. But they insisted on these traditional festivals, claiming that they represent the region’s cultural identity. Indeed, Madeira’s traditional festivals preserve characteristics of sociocultural identity and are also a means for establishing human relationships. Festivals can serve the purpose of promoting cultural or social encounters between tourists and residents (Marujo, 2015).

Participant observation in the field of tourism is not easy. Looking at and listening to the behaviour of residents and tourists in a given period, without controlling or manipulating them, requires a great deal of skill on the part of the researcher. Humility and respect for others are also needed, especially when the researcher intends to do a ‘deep dive’ into the culture under study. It also depends on one’s level of rigour, commitment and involvement with the subjects under study (Pereiro, 2010). On the other hand, for participant observation to take place, researchers need to maintain a relationship with their informants which is based on trust.

In one of my research processes, I joined the Camacha Cultural and Recreational Association, which coordinates the so-called ‘Ethnographic Village’ for the New Year’s Party. The process of integration was not easy from the outset. There were rules to comply with, for example, in terms of clothing. I was assigned a 17th-century costume worn by women in rural areas of Madeira. On the first day I arrived, the coordinator of the association immediately ordered me to remove my lipstick because rural women of that century did not wear make-up. Engagement with members of the association, particularly the older ones, was somewhat slow. Despite the coordinator having explained why I was joining the association, the members regarded me as a outsider. The expressions ‘I am here for an investigation’ (research is termed ‘investigation in Portuguese) or ‘I am going to investigate for a thesis’ were deemed offensive. In a somewhat aggressive tone, some women would immediately reply: “Are you with the police? There is nothing here to investigate”; “What do you want to investigate? We are all above board and work perfectly well”. As I explained the purpose of joining the association and replacing the word ‘investigation’ or ‘investigate’ with ‘work’, the relationship of trust grew. But they were the guardians of cultural traditions and, therefore, I had to prove my knowledge about these traditions. In one more affable exchange, one of the ladies approached me and said: “Do you know how to knead the dough to make bolo do caco (a type of traditional Madeiran bread) or did you just come to pose for a photo?” I replied that I knew how to do those things because I also came from a rural area in Madeira (Figure 1). After the exams, my integration process was successfully completed. I started to take part in all the daily tasks, where the process of accessing information became much easier. 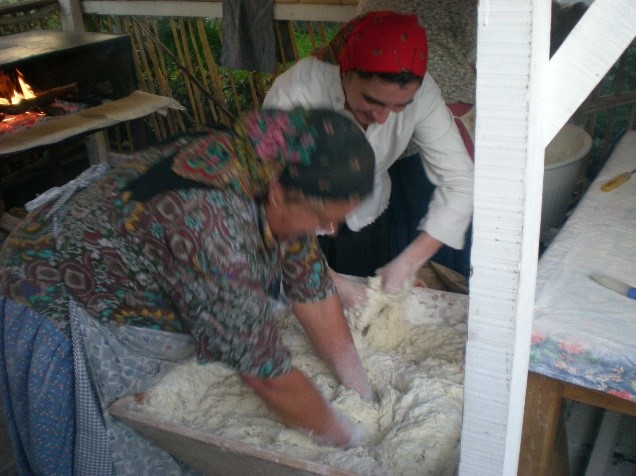 In my study, I reached the conclusion that, even more so than other techniques, the technique of participant observation is fundamental in describing and analysing the interaction between tourists and hosts, the different ways in which tourists behave regarding the cultural attractions of a festival, the reactions of the hosts to the presence of tourists and the way in which they preserve and promote cultural identity by means of the festival. Like Malinowski (1992), I believe that the most effective approach to investigating cultures is participant observation.

It is necessary to set aside the tendency that some researchers have to analyse only the negative impacts on the nature of contact between tourists and hosts. It is true that the encounter may even be brief in some cases, but, contrary to what Krippendorf (2006) claims, it is neither misleading nor artificial. The hosts, in the case of festivals, do not feel ‘used’ or ‘exploited’ by tourists. They feel ‘pride’ in taking pictures with tourists. They declare that their ‘smile’ for the photo is not ‘fake’ but ‘real’. They state that they are not at the festival to ‘please’ the tourists and when they interact with them, they do not do so out of any sense of ‘obligation’. The tourists also interact with the hosts to ‘learn something new about the culture they are visiting’. As was confirmed in my research, and as stated by Resinger & Turner (2004), these meetings can develop positive attitudes, create bonds of friendship and foster future contacts.

In tourism studies, participant observation has been mainly used by anthropologists who study the behaviour of tourists or the local community’s reactions to the tourist phenomenon (Cole, 2005). But this technique has also been used, for example, to measure tourist satisfaction (Seaton & Bennett, 1996; Bowie & Chang, 2005; Ince & Bowen, 2011) or experience (Carlsen, 2006). In the case of tourism events, participant observation helps generate theories and ideas for new research and also to validate existing results (Altinay & Paraskevas, 2008). It is an essential tool for describing and analysing the relationships between tourists and residents or between tourists of different nationalities (Marujo, 2015). I should also emphasize that some books on tourism research include participant observation as an important method for data collection (e.g. Jennings 2010; Richards & Munsters, 2010; Ribeiro & Foemmel, 2012; Veal, 2017; Radel, 2018).

The research led to the conclusion that traditional festivals are a way for the Madeiran population to preserve their history and collective memory of the past. They are a way to show globalized society the Madeiran way of living. They allow new forms of sociability and new relationships with the world. The traditional festivals of the island of Madeira have guardians who are the representatives of cultural transmission. They are always organized by the residents and serve the function of a ‘kind of amphitheatre’ in which the habits and customs of the island are produced and reproduced (Marujo, 2012). Via the festivals, historical, cultural and social heritage is revived by the older community. Through them, the young seek to continue the cultural identity of the island. Children have the opportunity to have a more vivid contact with regional ethnography, and festivals thus play a pedagogical role for the younger generation. On the other hand, they are an opportunity for tourists to experience a different culture from their own, where they can have experiences of a different kind and also have social and cultural interaction with their hosts (Marujo, 2012). The meetings that take place between tourists and hosts at festivals are currently one of the richest phenomena of intercultural communication (Marujo, 2012, p. 476).

Carlsen, J. (2006). The economics and evaluation of festivals and events. In Yeoman, I. et al (Eds), Festivals and event management: an international arts and culture perspective. pp.246-259, London and New York, Routledge.

Malinowski, B. (1992). Argonauts of the Western Pacific. London, Routledge.

Selwyn, T. (2000). An Anthropology of hospitality. In Lashley, C. & Morrison, A. (Eds.), In search of hospitality: theoretical perspectives and debates, pp.18-37, Oxford, Butterworth-Heinemann.